About Monkey Made of Sockies 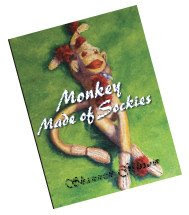 First there was my mother’s sock monkey. I inherited it after her passing. I’ll admit I was never one for stuffed toys or dolls and I tucked it into an old cedar chest and there it sat for many years.

One day there was a competition in which you had to paint a fish and a pear and relate it to something you loved. So off I went to the grocery store to pick up items for my still-life. Though the pears were beautiful, the fish really didn’t turn me on. I was headed out to the store when I saw the goldfish crackers. I laughed out loud in the store and snapped them up. I knew those crackers were the perfect fish for the painting. And the jingle from the commercial was stuck in my head.

So I went home and began to set up the still-life. I was still giggling about the crackers and humming the theme song when I remembered my mother’s sock monkey. I decided to make this a tribute to my mother. 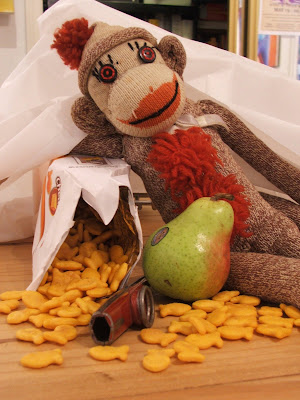 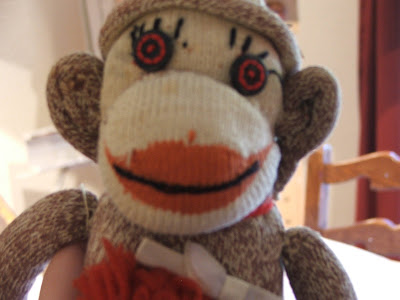 Next, I added a black and white photo of my mom and her cousin as children. The crowning touch was the kazoo as Mom was a brilliant musician with a highly developed sense of humor. 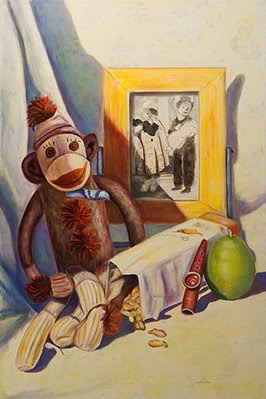 Have you ever played basketball? You know when you take a shot and your wrist snaps and you just know the ball is going in the basket. You don’t even have to look, you just know. That’s how that painting was for me. It just felt right.

Now, Monkey Made of Sockies is the proud winner of the 2005 Parent To Parent Adding Wisdom Award. The only award program ever to be honored by Disney.

37 sock monkey paintings later, Monkey Made of Sockies is still going strong. He’s now reincarnated as a golf club headcover manufactured by Daphne’s. And even has his own music video!

He’s carried on tour by PGA Pros, Jennifer Rosales, Mitch Thomas and Leta Lindley. Leta will be featuring him in her tournament. We will be giving a portion of the proceeds to help children with Prader-Willi Syndrome.

And now he’s on mugs, tee shirts and a host of other products.

Amazing what a spark will ignite and where it will go if you fan the flame.

Thanks Mom! I know you can see me and you are enjoying the ride as much as I am!